Beltane: The Beginning of Summer

These stars and yellow moon are as bright as ever above the twin ritual bonefires crackling and sparkling the faces of your friends, all the sheep and cattle. It is Beltane, Mayday, and the sacred druids are driving the herds between the two fires to purify them ensuring good health and fertility. The cacophony of odors and sounds and your tired feet remind you of the Maypole dancing earlier that day and your secret beloved.

Our European ancestors were both pastoral and agricultural. The lives of both animals and crops were governed by the seasons of the northern hemisphere and, of course, coincided with events in the heavens. The wheel of the year, eight sabbats which celebrate these important events, includes Beltane. Beltane on May first is one of the pastoral (domesticated animal related) rather than agricultural related sabbats of the year. A time when domestic animals were being made ready at the start of summer for herding to better pastures and wild game was on the move. Druids drove cattle between two bonfires as a powerful cleansing spell to ensure the herds would be well and increase. Interestingly, the word “bonfire” derives from “bonefire”. Many of the fires were comprised largely of animal bones. Beltane celebrates the union of the Goddess and the God.

Do you have animals in your life important to you, perhaps dogs or cats whom you love? Beltane is so very relevant in our lives even today. Celebrate Beltane as the beginning of summer by reconnecting with the fertility and vibrancy of nature, as a time of gratitude for animals, especially the ones dear to you.

One way to celebrate is the creation of May Baskets full of flowers to hang on the doorknobs of friends and neighbors as token of friendship. Another way is to create a Beltane Maypole table centerpiece as a symbol of fertility and the world tree, Yggdrasil. Create an altar that honors the Goddess and the God and their union. The altar should be covered with cloth of green and/or brown. Symbolize the water element and the Goddess by centrally placing a ritual bowl of water. Symbolize the element of fire and the God by placing floating candles in the bowl. The rest of the altar should be decorated with things from the earth, flowers, crystals, etc. 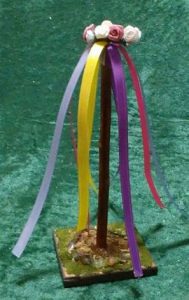 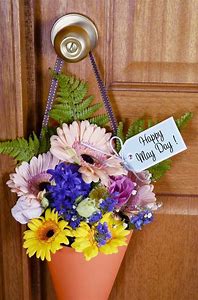